Oy, my entire house/shed is on ‘vibrate’. Uninterrupted rattles/buzzes from inside every piece of wood. I’d noticed it last year also, about this time of year, and researched the fabled ‘Death-watch beetle’. Problem is that the buzz-frequency on the Wiki audio clip and on a Video is so much slower than ‘my’ guys. Here, they go on at about 30 beats per second. About the same sound you can easily make by forming a ‘T’ with your tongue and blowing out. Try it, just to know what I’m going through.
No, I fear not for the reputed Omen of Impending Deceased Status often associated with this insect. It’s just a sense of being violated, the mindless robotic vermin inhabiting my tables, chairs, bookshelves, door and window frames.
Wiki, and several other experts say they eat almost exclusively oak. (?) All I got here is white pine. Is there some other boring creature, the males of whom have vibration all-star buzz-offs every Passover?


Big late-breaking Update: I just this second noticed a bunch of ‘exit/entry holes in a set of high-quality 3/4 inch plywood cabinets, right here in front of my face as we speak. Oak veneer. Exactly 3 millimeter holes, just as they are supposed to be. So yeah, looks like a bonfire of the vanities might be in the offing. I really can’t sleep with the sound of my life ticking away coming at me from 20 directions./ Sleepless in Tel Aviv

I suppose I really should come clean about my love life. We have, after all, been an ‘item’ for going on two years.
And besides her laying me a delicious egg for breakfast every day, (perhaps as a quid-pro-quo for a generous handful of cat-food every morning at 5;30) we seem to be ‘bonding’ in a robust, and possibly worrisome, fashion. 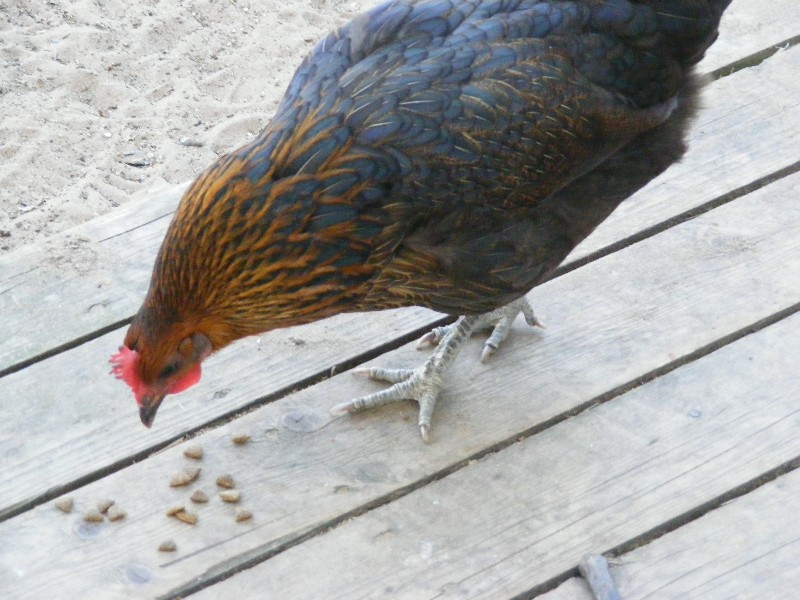 ITEM: It’s now ‘Our’ Lap-top’: No sooner do I move from my computer chair then she ensconces herself comfortably in it, and commences to peck, ‘million monkeys’ style, at the keys and lights, until, (and it’s now four times she done it) she boots the thing on, to her great delight. By now I recognize just about every variety of ‘cluck’, from the ‘all-ok’ “bak-bak-bak-bak through “dak-dak-DAACK-bac-book” where she tries to imitate a rooster, to the early-dawn ‘daaawck…da-huh-huh-duck?” which is a classic trans-species complaint about having to get up for work in the morning.
There is another vocalization she uses to tell me she’s just laid an egg. I try not to pry. Sometimes she works on the process, there in the bathtub I filled with straw, for two hours or more. Not sure I myself could do it, so I refrain from discussing the challenge with her.
But when she get’s Windows 7 to initialize, she always emits a cluck that Microsoft possibly never imagined.
Anyway, she is never more than about a meter away from me, especially when I’m weeding. Lot’s of bugs and worms un-earthed. Saves her digging. Every morning at first light we do a tour of the entire gardens, checking for new surprises. She’s right there, underfoot.
I guess the troublesome part is the bed. Why does she insist on spending every free minute on my pillow? I’m thinking of giving her her own damn pillow, on ‘her’ side of the bed. Yes, she poops on the blanket sometimes, but it’s no big deal. If you love someone…
I have a table in the middle of a room where I do paper-work, billing. I noticed yesterday that she was watching me with unusual interest as I shuffled receipts.
This morning, after failing to start my laptop, she went straight for that table. Grabbed the pen in her beak, as if to add a couple hundred shekels to Ya’acov’s bill. Wish I were making this up, but it’s all too true.
Woody Allen is probably my primary source here as to what to do. He told a shrink once “Doc, my wife thinks she’s a chicken…”
Shrink: Nu?
“Yeah, I’d have her committed…. but we need the eggs,”
And so, altogether, I’m not ‘conflicted’ about our relationship. On the one hand, never in my farm-boy life with chickens by the thousands did I develop anything more than a perfunctory role with these fowl, but on the other,’present‘, hand, I love that silly pigeon-breath hen like crazy, have to admit. Beats dealing with most humans wings-down. Like some French guy said “The more I meet humans, the more I like chickens.” (My translation.)

Got this MSG from an old buddy who’s supposed to be visiting me here this week.
Don’t worry, I can explain…
ABCDEFGHIJKLMNOPQRSTUVWXYZ

See, he’d sent me the latest offering from what’s left of a band we both worked in, off and on, The Young Zygoats. Don’t ask; the drummer came up with the name. I listened to it, gave it a ‘Meh’ on a scale of ‘fail’ to ‘wow’ and was curious what he himself thought of it. Prolly not much, knowing his refined taste.
We’re both about the same age, same physical complaints, memory degeneration, frequent urination… hey, my excuse is that I just plain wore out my prostate . Can’t seem to find any backing for that in the literature, but who knows, they probably just jealous.

Anyway, Bruce, my buddy, was trying some new drug, supposed to fix the ‘piss-a-lot’ thing, and I’d asked him how it worked out.
So all I knew, schedule-wise, was to train my ass to the airport, Thursday AM, and to meet up in the visitor parking. Didn’t know which airline he was flying. Also wasn’t sure who’d be meeting us with, like wheels. On my budget lately, 27 shekels for the train one way ’bout maxes me out.
Sooo… here we go:

“A ‘B’ CD? (Yeah, that’s what I called it. His mileage varied:.)
‘E’?  ‘F’! (Ok, looks like 5 thumbs down from my cuz Brucie.)
“G..HI ‘J’!” Finally, a bit of pleasantry)
“KLM” (Ok, now I know which flight to pray about.)
“NO ‘P’ QR”. (That’s the one took me a while to decipher. Silly backwater me; how’s I supposed to know they spell ‘cure’ as ‘QR’ these days? I had to look up ‘WTF’ less than six months ago…) So, looks like the new medicine’s no miracle drug. Figures, he prolly
got the placebo. They do that in these double blind trials.)
And now for the contact info:
“STU-VW-X-‘YZ’“
Yeah, like I don’t remember the hippy bass player. Even know Stu’s real name:’ Stuart Kitchner’. Takes a real dyed-in-the-wool these days though to still drive a VW. I made a note to look for flames painted on the side of it in the parking lot.
And yes, ‘ex-YZ’. The immortal Young Zygoats. Wow, it’ll be a thrill to have 3/5 of the original band all in one basket-case broken-down VW bug motoring up the Ayalon freeway from Tel Aviv to wherever… doesn’t happen every day.
Like I said in the title.