Ten second abstract (for readers like me with ten minutes a day to ‘Read my Subs’):

I turned the radio off. Israel Army Channel. Some music-expert going on about Gary Moore. Now, I like Gary Moore, but, rest his soul, he doesn’t deserve to have his ouvre described as ‘…on the line between ‘pope’ music and ‘roke’ music.’ That’s exactly what the announcer said, in fractured Hebrew.
How can it be that a man with presumably normal-looking ears can’t tell the difference between ‘pope’ and pop’. Or ‘roke’ and ‘rock’? The full Hebrew expression “musicat pop’ already voices, in the final ‘at’ sound of ‘musicat’, the vowel sound  that the deaf-mute should have been searching for.
I now have renewed disrespect for the insular non-inter-exchangeability of languages’ vowel-sets. Hebrew’s stubborn refusal to print any real vowels might have alerted me to the problem; that pet peeve waiting in deserved vain at the pound for adoption. Dream about it, Hebrew.
And while we’re on the subject…
This morning’s news, at 6:11 alerted me to the fact that Libyia’s evolutionaries are in communication via ‘Tweeter’. Yup. long ‘E’, as green as the ‘E’ in ‘street’. They presumably send ‘Twots’ or ‘Twuts’; who knows these days? I await the truly sad news, after they succeed in the ‘off with his head’ stage and scuffle among themselves with the tough question of which new head should be grafted onto the body-politic. Perhaps “What hath God/Allah twat?” will be ‘liked’ by enough ‘friends’ to merit a Wiki-Leak.
I do feel trivial and pedantic, insisting on pronunciation at a time like this. Still, Marie Antoinette was careful, in similarly ‘interesting times’, to suggest as her alternate menu, ‘cake’, having ruled out ‘let them eat coke’, and of coarse, ‘….cock’.
I asked, diplomatically as usual, the owner of the corner-store kiosk, on the way to writing this, whether he could ‘hear’ the difference between ‘pope’ and ‘pop’, or ‘roke’ and ‘rock’. He replied by claiming not to know squat about ‘the music kids listen to these days’. Which wasn’t the question, but the fact that he didn’t ‘get it’ pretty much confirmed my thesis. Ok. I feel all better now.
I think y’all fur riding this pest/ js

Wu: So, speakers of disparate languages are suprisingly incapable of hearing the phonomes of each other’s tongues?
Me: Hmm. I shoulda just let you write the piece. Woulda saved 20 kilo-bytes. -beats. -boots. Whatever

I’ll admit it: When I saw/heard that Beth, Seedsower had planted X-thousand broccoli I was overcome with competitive spirit. I dropped everything else on my daily schedule to rush home and plant, oh, a hundred of my own.
It might have been Ben Gurion, I’m not sure, who suggested that Israel would be wise to declare war on the United States, to quickly lose, and thence to benefit from a ‘Marshall Plan’ rehabilitation effort. Said in jest, of course, but still. I am in competition with my friend in the Promised Land of Democracy. In the end we should both benefit from the agronomy data: yield per acre/ optimum temperature for germination, etc.
The good news may even filter down to our Muslim neighbors, who are all, as we go to press, currently engaged in bitter and murderous street battles over the question on plant-spacing. Mohammed, with the advice of his nine-year-old wife, specified 1/3 cubit (31.403 cm.) on pain of public stoning. We are carefully watching as the awakening hordes in Tunisia, Egypt, Lebanon, Libya,etc, fight for their right to determine their own separation between seedlings.  Muslim Xangans , many comfortably ex-pats, may be expected to toe the party line but let’s check their sites for a fairer evaluation.
Of cource I’m being facetious. The political situation here is turbulent and critical, with a positive outcome in no way guaranteed. Democracy and respectful self-rule doesn’t come with one’s mother’s milk, and needs to be re-discovered’ by every culture, as it sadly tries ‘all the alternatives.
Anyway, back to Beth, the sweetheart, with her vacuum-assisted planting automaton neck-and-neck with my old-fashioned one seed at a time, between thumb and index finger, each seed receiving its personalized Hebrew blessing, ‘Go thou, be fruitful, and multiply’. Time will tell.
I need, today, to finally test the tired soil here, to use my kit I bought in 2004 at Frey’s Greenhouses in Manheim, PA, and to know, after a fashion, how much Nitrogen, Potassium, and Phosphorus to add to the mix. My efforts to recover Phosphorous from piss, in the form of Struvite (Ammonium Magnesium Phosphate) have so far come to naught. Perhaps the excess of ethanol in the raw material is critical?
Whatever, here is my horsie, in the first leg of the race. The babies are about two weeks old. In ‘dog years’, that’s the equivalent of pre-pubescence. Let’s hope, with ballet lessons and soccer practice, I can make them into productive adults. JS/ Tel Aviv 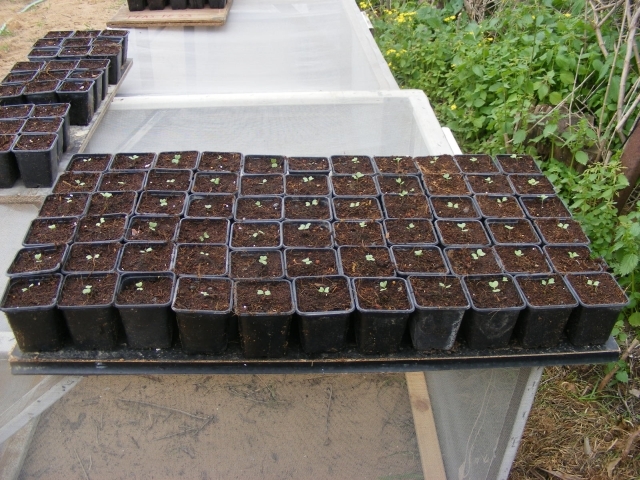 PS: As an added plus(?) I’ll include my adopted pussy-cat, who decided, on the strength of a few days of cat-food, to be my ‘friend’. He takes no stand on the issue. Must be Swiss… 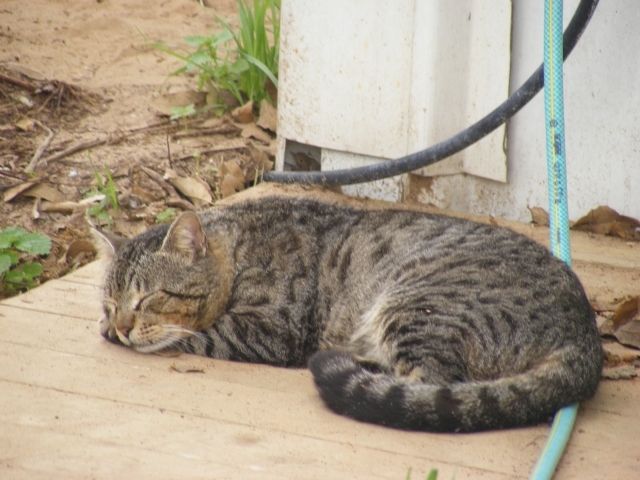 And this is my alarm-clock, a fortuitous ‘camera-obscura’ result of a hole high up in the East wall of my window-less shed. The sun-ray tracks through the picture on the far  wall each day on a somewhat different path, reflecting the fact that the earth is moving around the sun such that the Northern hemisphere gets a 2-minute longer day every day. Yeah spring. 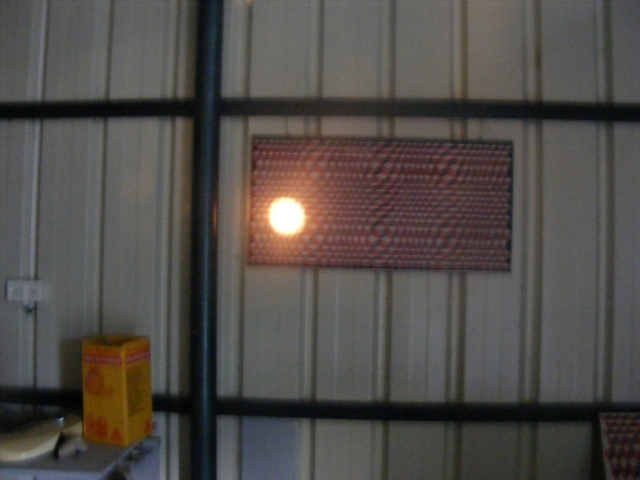 I awoke un-characteristically late yesterday, Shabbat/Saturday, our government-mandated day of rest. It had rained all night; about a three on the 0-10 scale between drizzle and ‘Jeezuz, who ordered this shit?‘ The absence of my trusty round spot on the wall from the sun beaming through a hole in the roof told me that the skies were probably ‘socked-in; that is, ‘total overcast’.
Anyway, I fell out of bed at 7:30 (!) (forgive me, Druid Gods of the 6:37 sunrise) and stepped outside to … to find an atomic bomb had apparently exploded somewhere nearby. I hadn’t heard any boom. (I hear
any Hamas or Hizbullah bullshit from my house within a thirty-mile radius, so I ruled out Muslim pathology also. What could be the cause? A fire at the used car-lot- junction of Road 4? A demonstration
against the increase yesterday of the price of gas from $8.34 a gallon to $8 47? The commentators seem to have agreed that this latest outrage might be ‘the straw which will break the camel’s back‘. Really?
We have in Israel, seemingly, a particularly strong camel, such that anything less than 4 times the price of gas in normal countries is considered ‘an acceptable load’.
Without turning on the radio, I rushed to try to capture the amazing scene on film. Looking at my results, I have to admit that the full extent of the experience was not captured, mainly because of the motion of the smoke-plumes and the cloud turbulence. Black smoke fairly exploded from the source, and the devil’s hydrocarbons found a
dynamic playground at the ‘ceiling’ between the 3000 foot cloud level, where they whirled and whirred in a wild world of activity. I did, as any scientist worthy of his calling, plot the azimuth of the event: North-west. A geodetic line to Sweden. (It’s taken me years, beaming my antennas from Pennsylvania, to realize that Great-Circle routes are devilishly deceiving: Due west from Philadelphia beams straight for South Africa, contrary to the intuitive feeling that one should be aiming at England.
At any rate, my younger son, always in touch with security-related developments, phoned to tell me that what I was looking at was the total demise of the 20,000 square foot IKEA store, about 20 miles away.
Now I have a lot to say about IKEA. Perhaps 30 times I have been so enraged by their deaf-mute so-called ‘instructions’, the stupid picture of the schmuck at his wits’ end calling some hypothetical Ikea-Central, trying in vain to explain how ‘the piece that kinda holds the shelf doesn’t fit’ to some ESL dropout in Bangladesh. Even
more depressing, the typical Israeli lack of any skill at carefully describing anything, using a language (Hebrew)which shouldn’t even be included in the category “languages”, built as it is on a pathetic foundation of mainly stolen terms from real languages, appropriated without undue attention to the precise meaning of the purloined word.

Fast-forward: IKEA burnt down, then burnt up. No more particle-board closets to rot where they rest on the tile floors which Israelis insist on cleaning by spewing mega-gallons of water on the floor. (I subsist by collecting all the thrown-away furniture from last year, left on the sidewalk. I need only to cut off the rotted lower ten centimeters of the IKEA-schlock 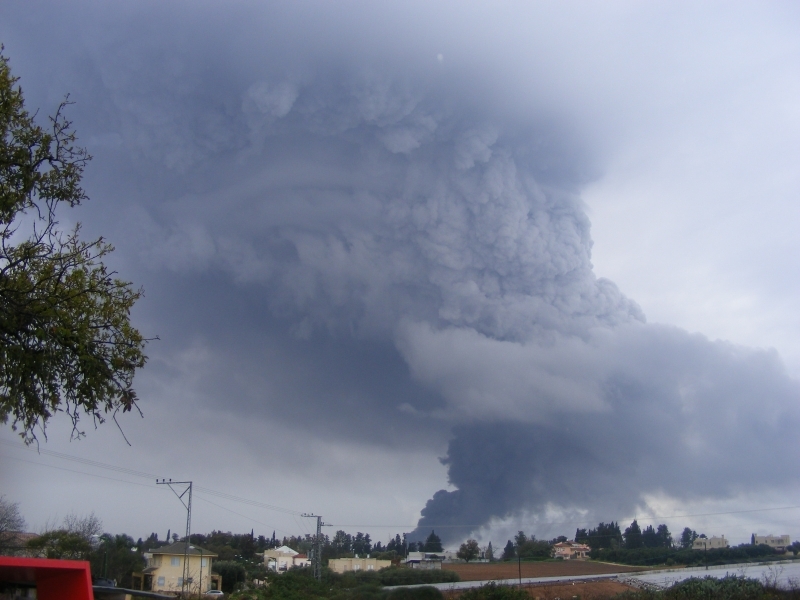 Except that I owe my beloved readers a sincere apology for my recent absence:
My working computer is ensconced in a garage, where I never seem to feel comfortable in writing lengthy epistles. That, combined with my late obsessive agricultural endeavours led to an unanticipated hiatus
in posting here. The fact is, though, that having set up myself as a
dependable source of intrigue, I have an indisputable obligation to persist. I am manifestly sorry for my absence. Tech-Fact: I may shortly secure an internet connection at my AG-Office, where I spend
most of my hours. As soon as that becomes real, I shall become once
again the loving, attentive, supportive, and invigorative presence I’ve tried to be these last four years or so.
Thank you to those who asked privately if I was still alive.
Oh, and anyone not instinctively bored by fuzzy pix of plants and their development can look forward to a photo-summary of what I have in fact been doing instead of gawking at the Xanga Front-Page these  last few months. Gracie Slick’s “Don’t mean shit to a tree” seems to sum up my impressions as I peruse to foibles of the Featured
Un-washed.
Yonatan/Tel Aviv/ Feb 6 2011