Yeah, what they won’t think of. I’ve been toying with the thing for 12 hours here, and thought to file a first-impressions Xanga report. Enjoy.

Bottom-line: A worthy novelty-market offering, I suppose.
Ok, having put the bottom line at the top, I have no further duty to respect format, and so I’ll just discuss Pluses and Minuses as I see fit, and sue me.
I had the Unit delivered last night. I was already in bed, but I do remember hearing engine noises, probably the crane. I’d asked ‘Bruno’, the fellow I bought it from on E-Bay, to put it somewhere near the house, like on the lawn, but this morning I saw the thing, all shiny, out there on the side of the street. Damn. It must weigh a ton. Literally, 2200 pounds. Oh well. One of the pictures in the Korean-language manual (the back half of it, which is all Bruno still had) shows a guy with his out in the middle of a street(!). I tried to push mine, to no avail. It does come with wheels for maneuverability, I’m guessing, but the lever in the Listening Booth, when you slide it to ‘P’ (obviously stands for ‘Push’ or ‘Pull’) kinda locks the wheels. So put ‘Lack of Portability’ in the Deficit column.
On the plus side, the sound is superb, state of the art for a 45 watt system with 4 speakers. The listening compartment is quiet and well padded, with two seats front and 2 more rear, I guess for parties. Says it has ‘Air Bags’, whatever that is. I guess if you get short of breath from the high-fidelity tunes. There’s even a big wheel in the front of the cabin, but so far it doesn’t seem to pan the audio at all. I may have to use Google translate.
Veracity: I must admit the likeness to a motor vehicle is un-canny. All they left out, obviously, is the un-necessary (?) clutch pedal and a gear-shift lever. In its place is the aforementioned slider. It’s labeled with letters, ‘N’, ‘R’, and ‘1-2-3’, whatever they mean. My current theory is ‘Nothing’,  like with the Chinese sweat-shirts we see here with gibberish printed in English on the front.
Battery- life: No problem there, although it did take me a while to figure how to get to the compartment. Turns out there’s a lever up in the front, duh. I pulled it finally and the front hatch opened. Lots of guts in there, in addition to a rugged 12 Volt ‘battery to die-hard for’. Rated at like 100 Amps. What the rest of the stuff does is maybe in the book, although I suspect some of it is proprietary.
So there ya go. Oh price?
I paid about $2000 bucks for the thing, delivered. Yeah, you may be saying ‘that’s a lot for a lousy CD-Player’, but Bruno assured me that I can always sell it for about that, if I find the right victim. And as long as I don’t put too many miles on it. No problem there, I can’t push it even ten feet, unless he means miles on the rotating CD Drive. Lots of stuff I don’t know yet. Like even the name. The Hebrew Proof-of Purchase card says like ‘Die Wu: New Birah’. When ya sound it out. Or ‘Nu… Birah!’ which is what you say here to a bartender who forgot to pour your Goldstar draft, so busy gawking at your girlfriend.
Speaking of romance, I do need to spill the news of this purchase to my Significant Digit; I can already hear her bitching: ‘You paid too much, as usual, you sucker!’. So that’s kinna why I decided to lay out  the situation in a Review. And on the whole, yeah, it’s a nifty enough gadget for the money. Just wish it were a little closer to the house. JS/ Tel Aviv 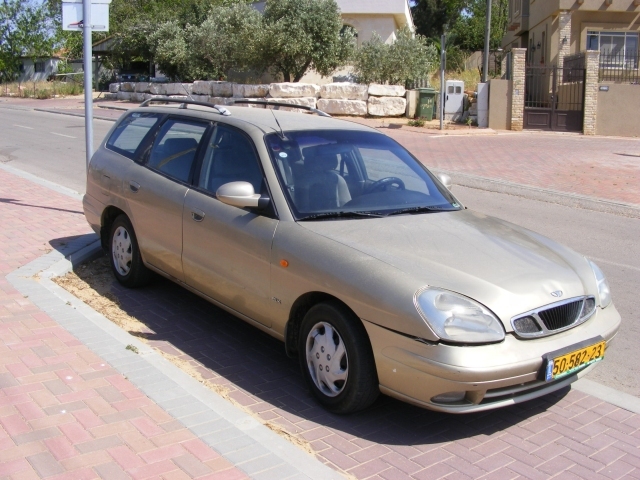 I grew up in the shadow of a THREAT. Thirty-foot high letters, built out of cypress 5 X 12’s and bone-white like ‘HOLLYWOOD’, ‘THREAT’ was the only word left standing after the Sale. Put there supposedly for keeps, the thing dominated the landscape, up there at the treeline above the upper pasture. Some half-nuts millionaire in the early 50s had bought the strip of land and paid for the thing. No one could bitch about it…in public. The complete ‘installation’ said: ‘STOP THE RED THREAT’. I remember sounding it out as soon as I’d mastered ‘See Dick Run’.. my letters had colors already way back then, and the ‘green’ish ‘E’ in the word ‘RED’ just felt so…well… dum.

But this was A-bomb Times. H-bombs, whatever it took. The other side had ’em too. Which explained the Civil Defense tests, the practice-hiding under the little wood desks in the one-room school, heads between our legs. Debbie Levitz was sure she could thereby survive an A-bomb or two, but the ‘H’?
A screaming comes across the sky. No not a missile, just a flash-forward in the story. Sorry.
Ok, a bunch of just-plain folks sworn to secrecy developed a plan to deal with it. No, not the Bomb, the Big Sign. They hadn’t learned to stop worrying and love the pesky Thunder of Armageddon, no, they just didn’t want to have to think about it nineteen times a day. So one wise guy who my Dad knew found a ‘fellow-traveler’ who owned a Bar & Grille called The Red Spot up in Campbeltown somewhere, and convinced him, with quiet contributions from us all, to buy the sign, and give it new life re-arranged as ‘THE RED SPOT’. Nifty, huh?
Ross MacArthur, the wing-nut who’d put the sign up, had a sudden conversion upon seeing the greenbacks, and agreed! All was well.
Well, except for the ‘THREAT’. Sure, the tavern-guy coulda made ‘EAT’ out of it but then he’d need an AT, right? For ‘EAT AT…’ And try making ’em from a ‘THR’.
So anyway, the ‘THREAT’ stayed. We all got used to it I guess. Could be anything; alfalfa weevil, a downpour just after you’d raked the hay, gas buildup in the silo. Stuff happens, we were used to that. Least it wasn’t radioactive.
Another flash cuts the sky: Forward to fourth grade. Me ‘n Debby going steady, as it were, played after school up there by the letters. Hide and seek. Skinny as a string of spit, I’d be found standing behind the ‘T’, mostly, and she, on her turns, usually lying flat (supine?) behind the foot of the ‘E’ in the brush. Hell there weren’t a lot of choices. And maybe it was the supine, but one day I told her, all Bogart-at-nine-and-a-half,
“Someday, honey, we gonna get the ‘H’ outta heah.”
“You mean the Farmall ‘H‘?” she asked, dodging the innuendo.
I looked skyward ominously. Seemed like a thing guys did in the movies. Debbie was a quick learn:
“Oh, that ‘H’, the bomb.” she offered.
But I couldn’t just let her win.
“No, the damn Letter, duh. You dense or what?”
She couldn’t just let me win.
“Sure, that’s what I thought you meant, kid. Then it’d be ‘T-REAT’, right?”
I drew a blank. (no air-quotes in those days). I did get it though, but not before a certain look of pity crossed her face.
“Yeah, a treat, Debby, nobody be watching us from across the fields…”, I steered back to my original course, “cuz we’ll be in Utah or somewhere. married, even…”
We sat on the flat rock, the one that MacArthur had bulldozed up there back in the day, to add permanence to the sign. Debbie looked stunning in the late-afternoon sun. I felt, I don’t know, ‘inert’. She must’ve sensed something:
“So, what’s the deal with noble gasses? I need names.” she asked me, just like that, no intro. We were learning the Elements in our primitive school. I hoped that was what triggered it.
“Um, helium?” I suggested, lamely, to another dismissive look.
“Boring.” she shot back, “just like your dumb Utah. No… higher:” she motioned upwards with her hand.
“Crypt-on?”
“It’s K r y p t o n, and no!” Debbie, again with the hand signals, this time downward. I was tiring of feeling dumb. but with her, you get used to it.
“Argon!” Somehow I thought of that one.
“Bingo. And that makes it TEAT.”
I quickly looked over her head, to down there in the valley, to make sure no one had overheard.
“How’s that make teat?” I asked cautiously.
“Simple: ‘R’ gone, silly.” Debbie laughed at her own wit… or at me. Hard to tell. I was just glad we’d gotten onto another subject worth pursuing; TREAT to TEAT.
“We could lose a ‘T’ then.” she was back to moving letters, the slick chick, but I was ready:
“Left or right?” I asked, all grade-school lascivious, lowering my gaze till she caught on and blushed.
“Depends on if you wanna EAT or just drink TEA?” Debbie kinda spit over her shoulder on the word ‘tea’.
Folks like us didn’t drink tea, you need to unnerstand. I’d only ever done it once, when my Mom was in the hospital for my younger brother, and my Dad took us to an actual restaurant and, I don’t know, probably wanted to show off. Tasted horrible. People in England drank tea. That’s why they talk funny and look that way.
“So ‘EAT’, it’s a deal.” Debbie put her hands in her jacket pockets, probably like some businessman she’d seen on TV once.
“How about ‘AT’?” I re-opened the negotiations, and she shrugged.
“A proposition? That’s a lot of tear-down work for a proposition.”
I didn’t even consider correcting her. Mainly, I didn’t even know she was wrong, but even if…
“Just ‘A’ then?” And that’s my final offer.”
“Oof, we’re back to bombs, dummy-head. Ain’t that why we killed the ‘H’?”
“Good point.” I told her, meaning it, “Yeah, let’s just get the ‘H’ out of here, and be done with it.” This time it wuz me with the hands-in-the-pockets.
“Yeah right… to Utah. ‘Morons’ live there.” She scoffed; a final pitying look, but with a coy smile this time. 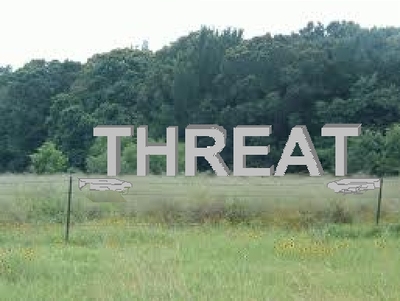 I like Debby. Always did. She’s great fun.
WU: True story?
ME: Sure. ‘Cept for the sign… and some of the the dialogue…
WU: What’s that leave?
ME: The THREAT. Look, Wuzie, she turned 63 this weekend; I’m a week behind her. You try dealing wid dat someday…
WU: Got ya.

Ah, I knew thee well, Brother. Your head-bobbing was the pride of the neighborhood. I’ll overlook the hours you spent trying fruitlessly to climb up a newly-stuccoed wall, failing more embarrassingly with each repetition, and still convinced it could be done, for hours upon hours.
Cause of Death will likely remain a mystery for the ages.
Any living creature, in a Universe which makes self-replicating Life immensely difficult to achieve, deserves a Requiem when it returns to the great Unknown.

“And so today, we are all lizards, I suppose.” I said at the little ceremony in the gardens. Went on to quote Leo Szilard, mentioned in that famous note to FDR, which after a bit of work in Manhattan somewhere, brought a kind of peace to a weary world. For a couple years. But that’s a full lifetime for a lizard, I reminded the crowd of flying ants and poppies.
Xanga Question, of course:
Is lying in state always on your back? Cause no one had ever really seen this guy on his back much, ‘cept the day he fell off the wall a hundred times. I laid him out on his belly, which seemed right, although it’d look silly on, like, Lenin, just saying.
And I do have both poses on file, for tomorrow’s papers; one is guaranteed to be kosher that way.

RIP. U were a contenda. 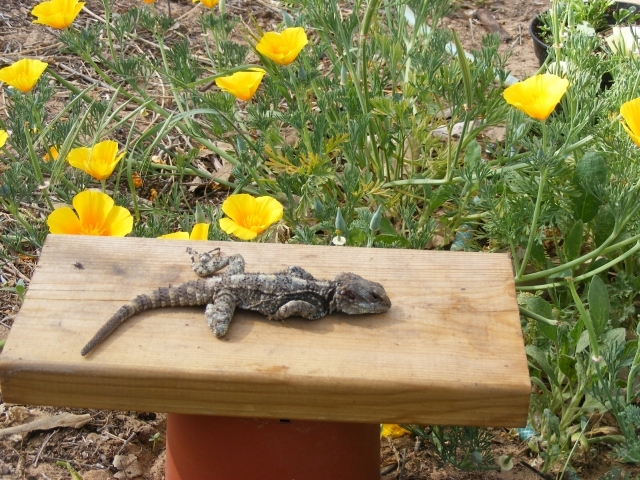