Well, I probably shouldn’t have taught my cat to swim. At least not in the big old claw-foot tub. She looks at those  cast-iron legs and who knows, goes all primal inside.
But actually she was doing pretty good. Back float, doggie-paddle, the standard beginner’s routines.
It’s just that when she gets soap in her eyes she goes nuts. Goes all ‘earth-moving mode’ on me. You’ve probably seen something like it, when a cat is digging. All four paws flailing, chucking ground in reverse. But in the tub this trick just makes waves. Awful waves, scary even. Tidal waves. And then I get soap in my eyes. What to do?
As usual I lift mine eyes unto the Net, from whence cometh my help. Specifically, the forums on ‘Help 4 Tabby’ (h-tab.com) Moderated by the ever-supportive ‘Yugoguy‘, whoever he is in real life.
I posted my question discretely, hoping to downplay the mental health issue in all of this. Just asked whether he’d heard of cats making tidal waves in bathtubs, and what to mebbe do about it.
The Reply, titled as is this post, was a breath of calm over troubled waters. The Vet actually congratulated me on my achievement(!) “Super, just super.” he wrote. “That’s not something just anybody could…(or would) do, but all I can say is ‘You go, guy! Naturally the problem you seem to be having is not one we see here daily, and yes, frankly, one or more loose screws in the cranium may need a bit of attention, but overall, I do thank you for your query. Try to see the tub as half-empty instead of half full (or more). Perhaps this will help. As always, Yugoguy.”

So there you have it. I wrote my new mantra on the mirror in the bath, just so I don’t ever forget:
IMA NUTS, BUT H-TAB SAYS ‘SUPER!’


Wu: ‘One or more loose screws’? He’s a half a box too kind.
Me: ‘More‘ could include ‘all of them’. I know?
Wu: Meanwhile, serious Xangans are posting on the elections, life on Mars, the disease called ‘Iran’, uploading pictures of homecomings, smiling kids from sea to shining sea, and you’re drowning cats?
Me: No, Wu, I’m teaching ’em valuable skills which could save their 9 lives some day. Plus the bath-tub’s full around the clock these days, ready for the War with Achmi-blow-job, however long it lasts, depending on who’s elected in the States, plus-minus help from Martians, should they exist, or Beth’s army of Precious-Ones. So I’m very much on-topic, smarty-pants.
Wu: Hold still, JS, while I try this screwdriver. And check the spelling of ‘NUTS’ while you’re at it.

Lots of quiet questions arose when my best friend breathlessly showed me two innocent pictures he took of the stairway I built, (to show to his aging father), and they turned out to have a visage of a white ghost-dancer superimposed on the image. I was in shock, asked him for these copies, then thought long and hard.
It took ten minutes to discover that cell-phone apps are available which add ghosts to pix, but a search of Google images didn’t find ‘my’ ghost-ess. I also read up extensively on hoax-detection methods, enlarged the photos to discover that the main photo pixellates long before the ghost, and pretty much decided that he was simply playing a trick.
I called him up and said ‘Nice app, Danny’. He insisted that he had no idea what I meant. Further in the conversation he swore on any sacred book worth reading that the pix were absolutely un-retouched. I let it go at that.
And so I turn to the sleuths here at Xanga, as usual, for salvation.
Yes, the pictures were taken on the very calender date when a dear girl taken away. And yes, I fell while working on the ceiling right above those stairs, and almost died myself. Are
these factoids relevant?
I tend to believe that if ghosts and after-life wanderings were real, we’d all kinda know and accept it, as there would have been concrete indisputable evidence built up in 10,000 years of humans. Just like we don’t doubt that fruit flies exist.
All in all, I do want to believe in this girl. She’s got a beautiful style, great taste in apparel, and seems to have had a message for me. Am I too skeptically dense to accept it? 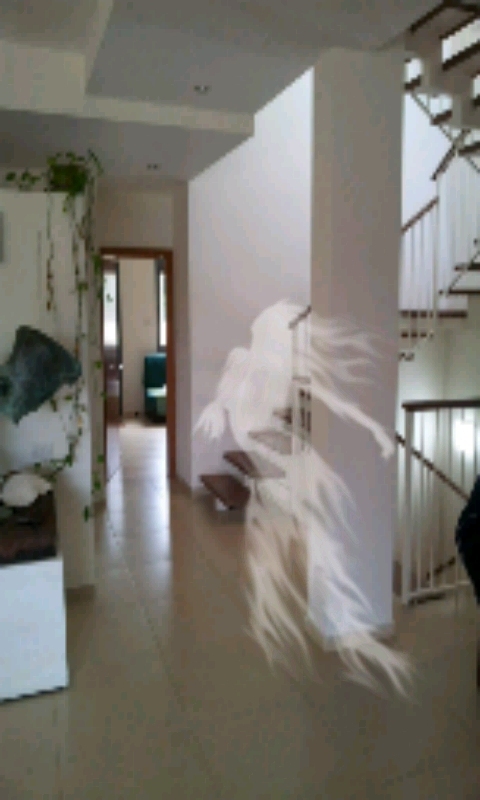 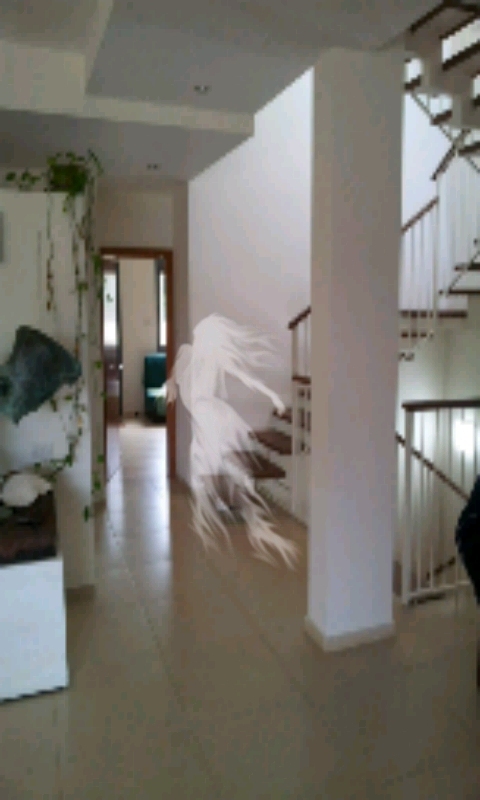