Sad story, I guess… for the RCA designer teams from Tokyo and Boston at To-Bo-RCA at least. Their dream of discretely main-streaming the newest ACROBOT ‘C’ into an unsuspecting 3rd grade classroom ended last week with a dramatic revelation in front of 39 shocked kids.
‘C’, who prefered to be called ‘Orca’ on the strength of a reversed reading of her design-name “ACROBOT” (TO-B-ORCA) actually did quite well for a few weeks, mastering the math, science, and even phys-ed at exactly the pace ‘normal’ to her supposed age group. Remembering to fall down innocently after only two cart-wheels, even though she could do them for a half a mile straight if needed. Lifelike and charming, she was a hit in and out of class. Even her playmates’ parents never guessed that she was a robot. Of course their interaction was limited to pointing out the direction of the playroom…and the refrigerator.
No, what blew it all up was ‘Phonics’. Yeah, remember ‘Hooked on Phonics’, the attempt, long ago, to help kids learn to love…well, words with an ‘F’ sound but spelled with a ‘PH’. ‘C’ wouldn’t have any of it, even though she could of course grasp the entire English data-base in a couple nano-seconds. No it was the sheer illogicality of the thing. Drove her nuts.
On the day of the dramatic end, she gave the first hint of a problem by quietly singing, to the teacher’s astonishment, a little ditty she’d heard from some old JSolberg CD:
‘A Tear is just a TearIt rhymes with HERE or THERENow tell me how we know which one…?
When the teacher tried to intervene, ‘C’/ Orca’ stubbornly feigned being sound asleep at her desk. The frustrated teacher promptly sent her out of the room, which might have been ‘C’s plan. At any rate, instead of MSG-ing her controller in the van out in the parking lot, she simply stopped by the cafeteria, grabbed a kitchen knife, made a (painless) incision across the top of her head and down her little chest, and with her powerful fingers… well, I’ll let her tell you what happened next.
When she returned to class it was a ‘different’ girl entirely which in the end had ambulances and police arriving from all over the county.
‘C’ just stood there, all bionic skeleton, wiring, and circuit boards, chanting:

Over and over, backwards and forwards. “Haha, I can do this for 19 hours”  she taunted the audience before disconnecting her batteries.

As I mentioned, the experiment has been put on indefinite hold, while heads roll at the developers.
But little Orca is safe and happier ever after, just so you know, back in the lab she loves, computing RSA prime number factors, stuff like that. And no FONIKS! 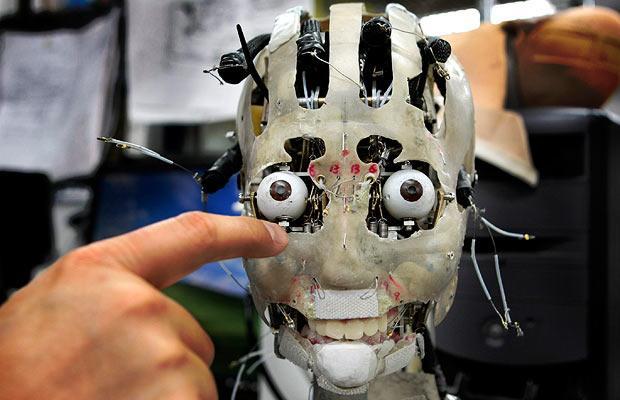