This little mouse-sized kitten was actually dropped squarely on my head from the roof over my back porch by its stupid(?) mother.
Child of a second-litter-in two-months from a truly  horrid feline, who breaks into the house nightly to savage my shelves and overturn the trash-can. A few nights ago she pried open the refrigerator door and took one rabid bite out of each hot dog, along with doing an un-planned ‘de-frost’.

So I wasn’t in the mood to meet her progeny. Even thought of desperate measures, but wisely relented . I don’t need any more Manson murders on ‘repeat’ when I try to sleep these days. 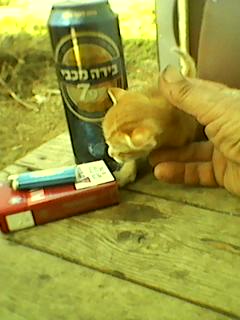 The mother totally ignores the waif, and realizing that it will die on my watch without intervention… hey, I had a choice?
An hour or so in my lap and we were already ‘bonded‘. And ten minutes ago I watched the miracle of life as the junior carnivore learned, in ‘real time’ to eat canned chicken hearts(!) This event has got to be one that the little bugger will tell its grandchildren: he went from ‘Oy!’ to ‘Oh boy!’ in the span of one smoke and a quarter can of beer.
(Yes, he might as well get used to the ‘micro-environment’ and his Savior’s time-keeping system.
Purring ensued (probably another ‘first’ for the guy, and he is as we speak sleeping like the baby he is. The End (for now).

ADD: maybe the impetus for my burst of inter-species compassion was noting, this morning, yet another ‘Cute Kitty Pix’ Word Press site’s subscribing here. I now have about 20 of them. I don’t know, I fantasize that this last ‘random fan’ knew somehow that Jxsolberg was a sucker for lost little furry orange purr-balls. And I damn well don’t want to disappoint her. ‘Her’?    Guess that’s another stereotype I need to work on overcoming.

I’ll know more, perhaps, after I send the person a nice thank-you and a link to this post.
Dumb Word-play Department: The kitten above, quite the precocious type, sent me a LETTER, explaining that she was from a LATER LITTER, and, knowing her criminal Mom, decided that she could either become just another LOOTER, or, alternatively, LOITER around until she caught my attention (and my heart.) She confided that she much preferred the LATTER, and awaited my response.
Like I wrote in a song here a while back: “What was I supposed to do?”
(Think I’ll tag this as ‘Cute Kitty Pix’, just for kicks. )

14 thoughts on “My new Orange friend”